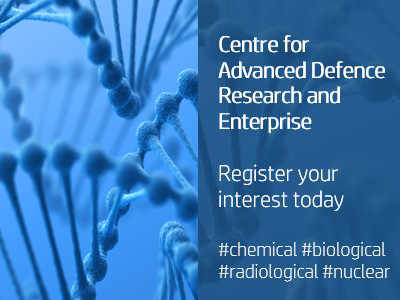 Defence is seeking Expressions of Interest from university partners to form a Centre for Advanced Defence Research and Enterprise (CADRE) to enhance the ADF’s ability to operate safely in Chemical, Biological, Radiological and Nuclear (CBRN) environments.

The CADRE will support DST Group’s ambitious research program under the Operating in a Chemical, Biological, Radiological and Nuclear (CBRN) Environments (OCE) STaR Shot. It will also have a potential remit to explore and capitalise on opportunities in sectors of overlapping need – such as health, civilian first responder and national security.

The CADRE will have an initial duration of five years, with an option to extend. Costs associated with running the centre will be covered by Defence through negotiation with the selected lead partner. However, Defence is looking for true integrated partners who each share a stake in the success of the CADRE.

CBRN hazards, whether released on purpose or by accident, are some of the most insidious and challenging threats faced by Defence personnel and civilian first responders. The OCE STaR Shot, led by DSTG on behalf of Defence, aims to enhance the ADF’s capability to respond faster and more flexibly to CBRN threats.

The STaR Shots are challenging, inspirational and aspirational S&T missions launched as part of Defence’s More Together S&T strategy that will drive the evolution of innovation pathways, from fundamental research and development through to prototyping and transition into capability.

A link to the Expression of Interest (EOI) documentation and information regarding how to apply can be found here.